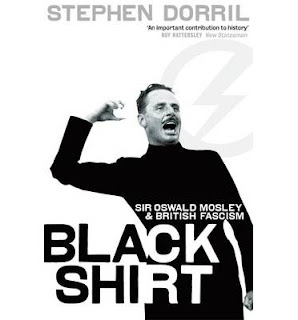 Dorril has given us an exhaustive, not to say exhausting, slab of a book about the Brit who would have been Hitler. The research is thorough and everything Dorril discovered is here. Two problems: (1) he doesn't like Sir Oz, which is by no means a sin but doesn't augur well for a biographer; and (2) he isn't really interested in fascism per se.


Regarding the not-at-all great man, Dorril has a thesis that he was a narcissist. No, really? A politician who considers himself the greatest thing since sliced bread? An aristo who is a wee bit arrogant? Surely not! Some numpty in the quotes on the back describes Mosley as a brilliant politician. No he wasn't. He bought himself a Labour seat and never won another election. He might have been a powerful orator but he was a hopeless politician.


Not discussing pre-BUF fascism undermines Dorril's story because it is important to realise how fashionable fascism was in the 1920s. The fascists were everywhere. When he left Labour and invested a job lot of black shirts, Mosley wasn't heading out into the political wilderness, he was jumping on the bandwagon of his day.


It's a decent book but there are better ones around. The best book about Mosley is written by his son, and as for British fascism, just look at Dorril's sources. My own favourite is Hurrah for the Blackshirts because we can't remind the great British public too often about the Daily Mail and Hitler. In fairness, Lord Rothermere wasn't anything like as keen on Mosley. He regarded him as jumped-up opportunist prat, which is a pretty good assessment. Mosley isn't the story of British fascism, he's the reason it didn't succeed.
Posted by rogerwood at 15:13