I don't know how she does it. Joyce Carol Oates has been writing novels for 54 years. To all intents and purposes she publishes one a year. Not only does she show no sign of flagging, she just gets better and better. 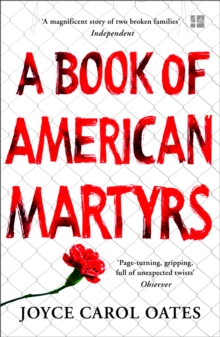 This, despite its terrible title (a play, I think, on Foxe's Book of Martyrs) stretches for over 700 pages and something like thirteen years. Essentially, extreme Christian Luther Amos Dunphy becomes convinced that God wants him to murder the doctors who murder babies in the womb - abortionists, operating perfectly legally in state funded women's clinics. His victim is Gus Vorhees. In November 1999 Dunphy shoots him down, kills him, and calmly surrenders to the authorities. The only problem is, he also shoots and kills the volunteer who drove Vorhees to work, a Vietnam veteran.


Dunphy refuses to plead in court and will only accept the court-appointed public defender, despite the thousands of dollars raised by rightwing evangelicals. Nevertheless, a jury in his hometown of Muskagee Falls, Ohio, fails to convict. Dunphy remains in gaol until a second trial finds him guilty. This being Ohio, he receives a death sentence. No one expects him to be executed. The two families - that of assassin and victim - enter that uniquely American martyrdom of waiting for justice to take its course.


The families are very different in terms of class, education and beliefs. In other respects they are not so different. A mother left with a handful of young children. Neither mother is functioning. Edna Mae Dunphy is lost in religious delirium. Her older children, Lucas and Dawn, have to assume responsibility. Lucas ducks out as soon as he is old enough to leave school. Dawn does her best to do her duty but other kids in her new hometown - the wonderfully named Mad Junction - bully and attack her. Dawn is a big girl. She fights back and...


Meanwhile, Jenna Vorhees, a lawyer, effectively abandons her three children to go on a crusade defending women's right to choose. Her daughter Naomi begins putting together an archive of her father's life and death. Eventually that leads her to her grandmother and her uncle, both splendid New York elite eccentrics. It also leads, finally, to Dawn Dunphy, now a professional female boxer awaiting her title shot.


We have marvelled throughout at Oates's literary skill - the different prose styles she uses for the two families, the italicised quotes which we eventually realise are from Naomi's archive. But then, in the final quarter, Oates reveals her particular talent, which those not in the know would never expect of a New England grande dame professor of a certain age. The fact is, Joyce Carol Oates is one of the world's great boxing writers. In my opinion her only rival is Norman Mailer. And Mailer, so far as I know, never wrote anything as good as the last two chapters of An American Book of Martyrs. Frankly, it's essential reading.
Posted by rogerwood at 16:07