The sharp edge of a razor is hard to pass over; thus the wise say the road to salvation is hard." (Upanishad) 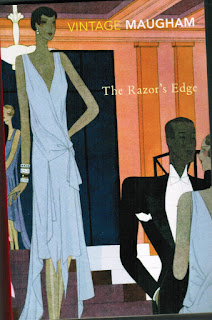 The Razor's Edge (1944) is said to be Maugham's last great novel. It came as a shock to me, who remembers Maugham's death being announced on the BBC News in 1965, to realise that by 1944 he had been a novelist for almost half a century. No wonder then that his prose is beautiful yet simple, utterly devoid of cliche. What is more remarkable is the structure, which borders on the experimental. In the very first section he tells us that this is a novel, based on fact, that will not have a conventional ending. He - Maugham - remains the narrator and makes it very clear that this is a close approximation of the real Maugham and (just once) he is even called Maugham by one of the other characters. Who they really are, beneath the false names he has given them, is neither explained nor hinted at; he tells us we would not know them, they are not famous people.

They are however glamorous people, as Maugham himself was supremely glamorous by that point. He starts just after World War I in America. Maugham is already famous and wealthy enough to roam the world at will.  Through his friend Elliott Templeton, a snobbish, effete American ex-pat, he is introduced to the Bradley family. Mrs Bradley is Elliott's sister, the widow of a middling US diplomat. Her daughter Isabel is a coltish adolescent hopelessly in love with Larry Darrell, who lied about his age to fly in the war. Isabel is doted on by Gray Maturin whose father is a millionaire stock broker. Also present is a younger girl, Sophie Macdonald.

And that is basically it. Maugham narrates his encounters with these people over the next twenty years. He tells us when he is reconstructing conversations and events he only heard about but did not witness. There is a vast amount of travel and a hell of a lot of conversation. Elliott becomes increasingly flamboyant and ridiculous but is always saved by fundamental goodness of heart. Isabel almost marries Larry but ends up marrying Gray, whose fortunes rise and fall with the Crash of '29. Larry almost marries Sophie but doesn't.

So what is it all about? Maugham, of course, witnessed the war and the human damage first hand with the Ambulance Corps. He understands something of the lost generation but is too old and too British to understand the repercussions for the American Dream. This is what he explores. Larry never recovers; he avoids all responsibility, professes no ambition, commercial or academic, but instead wanders the world in menial jobs in the search for 'meaning'. Isabel meanwhile clings to the battered remnants of the Dream like a tigress. Sophie lets it all overwhelm her. In the end, nothing is resolved. Elliott and Sophie die, Gray gets back into business, and Larry vanishes, his quest unresolved. Maugham is the only one left in Europe.

One key section towards the end is an interminable evening in a French cafe in which Larry tells Maugham about his time spent on the ashram of an Indian mystic. This is in fact Maugham's own story. It was he who really visited the ashram of the enlightened guru Sri Ramana Maharshi. Did he find meaning or peace? He doesn't say. This is a novel, not autobiography. And it is a wonderful novel, surely a Twentieth Century classic. It encompasses that quest for meaning in the face of mechanized war and unrestrained capitalism which was surely the driving force of all art in the last century.
Posted by rogerwood at 14:44