The Reign of Henry VIII, Personalities and Politics - David Starkey

This deceptively slim volume is Starkey at his best, one of his earliest books (written in 1995, republished in this form in 2002), before he became a TV character, cartoonish contraversialist and fawning royalist. 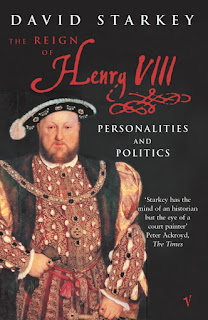 The attitude here is what made his name - that Henry VIII was the source of political power, not powerful in himself, and that his court was driven - and riven - by faction.
Because Starkey here is not aiming for sales but for reputation, he does not shy away from explaining his thesis and discussing the views of others. That gives tremendous life to the text. He also paints vivid pen portraits of the key players, not only Wolsey and Cromwell but figures like Anthony Denny, Groom of the Stool and absolute controller of access to the king. Likewise he offers assessments of the court women, especially the queens, that are fresh and which invite debate.


Essential reading, then, for both those new to the idea of court politics and those who simply want a vigorous and invigorating refresher. This Vintage paperback, however, sorely needs a better bibliography. A discursive one is not good enough for a thesis so heavily reliant on court papers of the time.
Posted by rogerwood at 14:56