Steven Gunn is a very distinguished history professor at Oxford. This book is based on his thesis from the Eighties. Research standards have moved on since then, not least because so many original sources are available online. 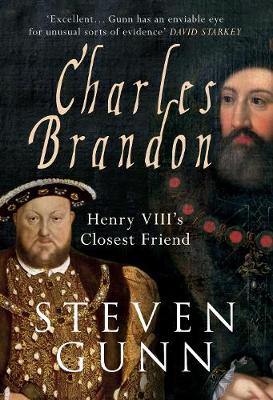 That brings me to the first problem. There is, as Gunn says, surprisingly little known about Brandon, given that he was a pivotal figure in a reign so thoroughly documented as Henry VIII's. There are reasons and those reasons are part of the attraction. He was always hard up and his matrimonial arrangements make Henry's seem straightforward. Very little written evidence from the man himself survives. I suspect he was bit thick. He was certainly a man who made his presence felt physically: he was bigger and better looking than Henry and he was a man who seems to have thrived on friendship.


One thing that is certainly known about him, and has always been known, though not apparently to Dr Gunn, is where he lived in London. He famously developed Suffolk House in Southwark, but Southwark Place, where he lived in his later years, was close by what is now Trafalgar Square. The evidence for this is twofold: the Elizabethan historian Stow, whom Gunn quotes on the subject but clearly didn't follow up by reading the passage in full, and the deed of Edward VI granting Southwark to the City of London, all except what used to be Suffolk House but had become Southwark Place, which belonged to Edward and his father before him, the latter having got it from Brandon in exchange for Norwich House in Westminster. An Oxford professor should really have sorted that one out.


The second problem is the habit of quoting the records as they were written. Why? Gunn has modernised dates, numbers etc., so what is so precious about leaving handwritten texts in ye olde englysshe? It doesn't work for me. It means the reader having to go over many of them twice when a goodly proportion weren't really worth reading once.


That said, the amount of research that has gone into building a picture of Brandon's activities outside London is hugely impressive. Gunn writes very well and even holds our interest through passages on feoffees and shire courts, which were no more interesting then than they are today. Overall, I miss the women surrounding Brandon. This, after all, is the man who married up to eight times, had at least six daughters, ran off with the French Queen and finally married his teenage ward, one of the brightest Englishwomen of the century. Brandon, I think, was very much a lady's man.
Posted by rogerwood at 15:41