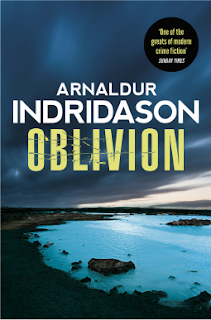 Of recent times Indridason has taken his detective hero Erlendur Sveinsson back to his youth. In Oblivion he is in his twenties, newly divorced and recently promoted to CID. The time is the 1970s for the main plot - a murder on the US airbase - whilst the secondary plot, which Erlendur pursues in his spare time, concerns the disappearance of a young girl more than twenty years earlier. This, for regular readers, is a reminder of the incident that dogs his entire career, the loss of his brother when he was a child.


A flashback within a story that is itself something of a flashback is clever. The linkage between the periods - the American occupation of Iceland after World War II and the continuing presence of the Americans during the Cold War - is even cleverer, deepening the narrative with acute social and political insight.


I cannot for the life of me see why Indridason agreed to allow the change of title for the translation. The original title was Kamp Knox, which is what the story is about - the original wartime occupation airbase which still dominated the area in the Fifties when it had been turned into emergency housing little better than a ghetto. This is the shadow that hung over the place the missing schoolgirl lived. There were rumours she had a boyfriend who lived on the camp, which made him lower-class, undesirable, inevitably drawing the attention of investigating police at the time.


The replacement for Camp Knox is the Defense Force base at Keflavik. Officially there should be no nuclear weapons stored there, but Keflavik has the biggest hangar anywhere and there are rumours about what might be cached inside. Hangar 885 is also the only spot on the peninsula high enough to have caused the injuries Kristvin sustained when he fell, albeit he was dead before the fall, hence the police interest. Keflavik is officially US territory and the brass won't cooperate with the Icelandic police, even though Kristvin was one of the many Icelanders who worked there, enjoying the fringe benefits of easy access to American consumables. Are the military hiding something or is it simply contempt for the natives?


Indridason gets better with every book. One of the attractions for me is always the horrific foodstuffs regarded as delicacies in Iceland. I was not disappointed in Oblivion - fermented skate in melted lard. Eeek! He seems to me to be well served by translator Victoria Cribb. But why on earth do they saddle his books with meaningless titles like Oblivion that makes them sound like  ghastly action thrillers from the Eighties?
Posted by rogerwood at 15:22