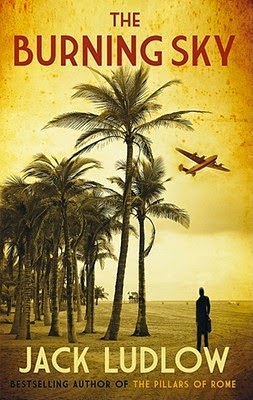 The first volume in the Roads to War trilogy, Ludlow has created a gentleman adventurer in the manner of Buchan's Richard Hannay (Cal Jardine even has a Scots heritage) but has updated the genre.  Jardine is not always a gentleman (see the eyebrow raising scene with a very different M) but largely so.  He is footloose and fancy free after an equivocal divorce and occupying himself by smuggling Jews out of Hamburg in 1935.  He is approached by a former comrade to get involved in smuggling arms to Abyssinia, which Mussolini has just invaded.

Ludlow is one of the pen names of David Donachie, who has knocked out several historical series under several names.  Given the number of titles we cannot expect high literature, but his prose is just about acceptable (far too many subordinate clauses for my liking).  His characterisation is good, though, and his research impeccable.  He gets to the nub of 1930s atrocities and his judgement is sound.  I especially enjoyed the ambivalent ending.  For Buchan everything was always sorted by the end, good always won, and the British way triumphed.  That is not the case here and it is that authorial choice that has me keen to read the next volume of the trilogy.
Posted by rogerwood at 13:15