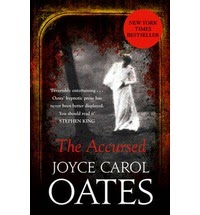 I have been an admirer of Oates since the early Seventies but haven't read anywhere near enough of her prodigious output.  The Accursed (2013) is magnificent, a triumphant meld of literary skill and pure imagination.  In this instance the imagination is Gothic and very dark indeed.

What we have is the world of the Princeton elite 1905-6 - professors, presidents, priests, and the socialist madman Upton Sinclair churning out utopian propaganda on the sidelines.  Woodrow Wilson is president of the university, whereas Grover Cleveland sits on the board and has twice been president of the US.  We are taken behind the veil of decency which cloaks these private/public lives.  Most thrilling of all, in many ways, is Poor Puss, the invalid Adelaide Burr who has never recovered from her wedding night and who confides the most outrageous things to her coded journal.  Even the historian who gives us the account is pivotal to the action in that his unexpected birth caused one of the many flowerings of the Princeton Curse.  There are subplots by the dozen, worlds within worlds, and a juicy cameo from Jack London and his 'lady' Charmian.

To say more might be to give the game away.  I simply cannot recommend this book highly enough.
Posted by rogerwood at 16:16