Memoirs of the Forties - Julian MacLaren-Ross 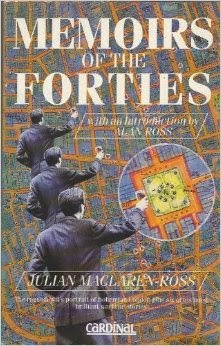 Julian MacLaren-Ross was a character, a hand-to-mouth writer hanging round Soho and Fitzrovia between the late 1930s and his death in 1964.  His writing seems, on the basis of this, the first incomplete volume of his projected four-part memoirs, to have been heavily based on his life.  The short stories included here certainly give that impression, as does the helpful introduction by his friend and publisher Alan Ross (no relation).

MacLaren-Ross was born in 1912, of Anglo-Raj stock.  He spent much of his childhood and youth in the more glamorous reaches of France but by his twenties was flogging vacuum cleaners in a seaside town on the South Coast of England.  He was called up in 1939-40 but discharged from the army for reasons unstated in 1943.  His short stories based on his military experiences were his first moderate successes.  Before the war his most successful stories were set in Madras, a city in a country he had never visited.

For the remainder of the war he collaborated briefly with Dylan Thomas on the notorious Home Guard documentary that was never made, and after the war largely subsisted on radio scripts.  These memoirs capture the flavour of Fitzrovia better than any other I have encountered, even those of the much more successful Patrick Hamilton (Hangover Square, for example).  I especially enjoyed his description of BBC Drama Head Val Gielgud as "a man with two beards, one sprouting from each corner of his chin."  I also enjoyed the half-dozen short stories included, my favourite being the one that first attracted the attention of Cyril Connolly, then the editor of Horizon, "A Bit of a Smash in Madras."

MacLaren-Ross lived far too dissolute a social life to build a literary career, thus he will only ever be a footnote in the work of greater artists.  But that shouldn't detract from the fact that he writes like a dream, effortless yet stylish and controlled.  I loved reading this book.