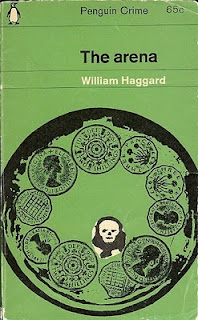 William Haggard (Richard Clayton, 1907-1993) was a professional civil servant.  Technically spy fiction, I suppose, The Arena (1961) is really a story of realpolitik.  The arena in question is merchant banking, supposedly the province of upper middle class English gents but - even in 1961 - the playground of foreign chancers trading in dodgy money.  Like the majority of Haggard's fiction, one of the principal characters is Colonel Charles Russell of the Security Executive, the sort of spymaster who calls in favours and drops hints over a brandy at his club.  But Russell is not the protagonist here.  The protagonist who drives the plot and arranges its denouement is Walter Hillyard, director of one merchant bank which is the subject of a hostile takeover bid from another.  Hillyard, too, is old school, so much of a gent that he and his wife don't have sex.  Hillyard's main objection to the takeover is that it is fronted by Sabin Scott, one of those pushy stateless upstarts.  As the story progresses, Walter's preconceptions of his world fall apart at the same alarming rate as his health (he is diagnosed with sudden onset diabetes).  He has always known, of course, that his father-in-law and senior partner Lord Laver passes for an English milord but is actually third generation Mafioso.  The bank Walter is so proud of was set up to launder the proceeds of Neapolitan crime.  He knows, also, that the director of the respectable bank he turns to for help has anglicised his name to hide his racial origins.  Walter knows these things but now he has to face them - and thus we are drawn into his personal tragedy.
The personal narrative, for me, sets Haggard above some other spy writers of the period.  The world he depicts is corrupt but his protagonist is not.  We don't care about the financiers and their shadowy clients.  We do care about poor old Walter Hillyard.﻿
Posted by rogerwood at 15:13