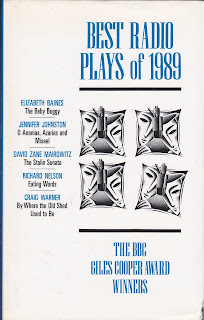 This is apparently the last of the annual series before John Birt began dismantling the artistic side of the BBC.  It is not the best of the series, it has to be said.  The Baby Buggy by Elizabeth Baines, is a two-hander about the demands and expectations of becoming a mother.  I thought it was great with subtle use of quite advanced radio dramatic technique.  Jennifer Johnston is primarily a novelist who writes the occasional play, and O Ananias, Azarias and Misael (great title)  would work equally well as a stage monologue or short story.  That said, it is a wonderful character study of a woman in the throes of walking away from her old life.  The remaining three plays are all by American writers who have either lived a substantial period in Britain or, in the case of Craig Warner, still do.  (Warner's recent work includes exceptional TV plays about Alan Turing, Lehman Brothers, and Princess Margaret.)  The Stalin Sonata by David Zane Mairowitz is the best of the three, a dark comedy about the two sides of Stalin - the bully with a taste for the arts.  Warner's piece, By Where the Old Shed Used to Be, is a freewheeling fantasy with echoes of Cinderella and a neat line in unexpected gore, for example when the more gormless of the repulsive stepsisters cuts her hand off in order to remove her bracelet.  It's not to my taste but this sort of thing was fashionable at the time and it is very well done.  Richard Nelson's Eating Words was simply not to my taste.

For a fuller, more academic appraisal of the individual plays in this collection, click here.
Posted by rogerwood at 17:09