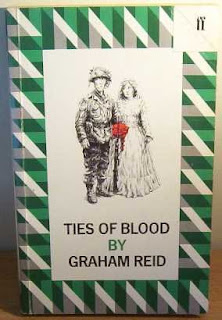 Where was I in late '85?  I can't imagine how I missed these six thematically linked TV plays, but I clearly did.  I remember the Billy trilogy from '82, which made Reid's name and introduced the telly-goggling world to Kenneth Branagh, but these...

Anyway, I'm glad I know them now.  Reid, himself a Belfast man who served in the British army, does not deal with the troubles as a sensational bloodfest.  Instead he focuses on those on either side of the conflict who have to live with it - local people, some Protestant, others Catholic, and the army of occupation.  In each play locals and army come together, usually for sexual purposes, and thereby cause conflict with their peers.  The excellent drawing on the cover above, by one P J Lynch, hits the subject matter perfectly.

Inevitably, the consumer is going to like some plays more than others.  For me, my favourites were the first and fifth, McCabe's Wall and Invitation to a Party.  McCabe's Wall is about bred-in-the-bone hostility.  McCabe's IRA sympathies date back to 1916 and he would sooner alienate his children than compromise his principles.  Invitation to a Party is a more complex piece; British soldiers are honey-trapped but the two lairy lads escape whilst the honourable soldier wanders innocently into a completely separate trap.  The play which didn't engage me was the last, The Military Wing.  A military hospital in which the nurses have military rank is just too weird for me to identify with.

Google as I might, I can't find what Reid has been up to over the last twenty years.  He seems to have hit his stride as he turned forty and then slipped into semi-obscurity.  Obviously his subject matter is no longer contemporaneous but I have no doubt Belfast still has issues, especially now the hardliners are making something of a comeback.  He has also lost his canvas, which was the sorely-missed Play for Today, but other writers of his vintage have coped by writing series and feature-length films.

I'm definitely on the lookout for the Billy scripts.
Posted by rogerwood at 13:11