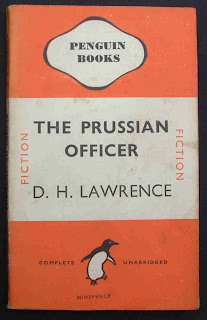 Poor old Lawrence never had any luck.  In July 1914 he marries a von Richtofen, in November he published a volume of short stories the first two of which are sympathetic portrayals of German soldiers.  A hundred years on, however, they are great stories.  The titular tail is really a collision of the castes: the officer is aristocratic, aloof from normal human emotion; his orderly is the common man, in love with a common woman.  'Thorn in the Flesh' is about new recruit Bachmann of whom too much is expected.

My favourites, though, are 'Daughters of the Vicar' and 'Odour of Chrysanthemums'.  'Daughters' is essentially about the class system in the same way as 'The Prussian Officer' - the good looking sister feels obliged to uphold the family status and thus submits to a loveless marriage with a strange vicar who comes from money.  The plain sister, meanwhile, falls passionately in love with a collier.  'Chrysanthemums', which I remember being forced to read at school when I was thirteen or so and had thus completely forgotten, is about the wife of a collier who has taken to drink.  She's stuck in the cottage with their two young children, waiting for him to come home, cursing him when he doesn't.  He's gone to the pub again, she assumes.  She won't lower herself to go and get him but she is willing to ask her neighbour to do so.  Eventually they bring Walter home.  He's been trapped in the mine for hours after everyone else went topside.  He suffocated.  His wife and his mother lay him out in the parlour.  For his mother he's a saint, for the wife he's dead meat.  She cannot comprehend that they were once one flesh.  She cannot mourn.

It is years and years since I read any Lawrence.  I had forgotten how ahead of his time he was, how preoccupied with sex and sensuality.   In many ways the short story form suits him best.  For me, the ones set in Nottinghamshire with an industrial background always hit the spot.  They don't necessarily have to be about mining - take for example 'Goose Fair' in this collection.
Posted by rogerwood at 12:02