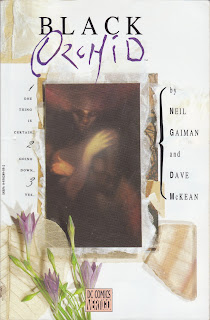 The cover of this 1991 edition gives no clue, but Black Orchid is the graphic novel as high art.  Gaiman, of course, is a legendary writer of such things, now also a major novelist - The Ocean at the End of the Lane is published this week.  Dave McKean, also an Englishman, is Gaiman's friend and early collaborator.  This work began as a short-run special edition DC comic, using one of their dud back characters, and became a cult.

The influence of the mighty Alan Moore, another Gaiman friend, is apparent in the deep philosophical back story.  Gaiman's appeal to comic book fans is evident in the way he anchors this very un-DC narrative in the familiar DC universe: the US cities are Metropolis and Gotham, the super-villain (but not the lead antagonist) is Lex Luthor, and Batman puts in a shadowy cameo.

But the best parts are when Black Orchid, a humanoid plant, retreats from civilization to the rain forest of the Amazon Basin.  Here, McKean's radical rethink of the way graphic art can lay out a narrative really come to the fore.  About 20% of the imagery is so evocative that the creators decided no words were necessary.

I was a major fan of superhero comics when I was a boy and again as a young man.  I tried one a few years back and had really lost the taste.  This is the way forward for me.  I want more.

[There is a brilliant essay on Black Orchid here, which also includes images of some of the sumptuous artwork.]
Posted by rogerwood at 16:15