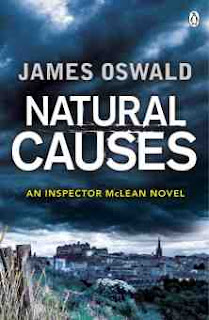 This is the first mainstream novel from Oswald, who has previously written fantasy.  The paperback has just come out and the second Inspector Tony McLean novel, The Book of Souls, comes out on July 4.  I read the ebook version.

You google Natural Causes and you get a lot of stuff about the opening chapter.  I don't know how it works in the paperback but in the ebook Oswald has deleted the controversial opening, which was actually a pitch for a competition, but includes it as an appendix with an explanation.  For me, a version of the shock-open or something else entirely should have been considered.  It took me ages to get hooked on the story.  Don't get me wrong, the writing is good, the characters interesting, but there are far too many of them and I kept forgetting who was who.  I was interested - I wasn't gripped.  Fortunately, perhaps, Natural Causes is 400+ pages and by about halfway (the hit-and-run) I was hooked.  Certainly, I will give Book of Souls a go.

Funnily enough, Oswald is co-judge of the Crime in the City short-story competition with Craig Robertson, another up-and-coming Tartan Noir exponent who promised much but didn't quite grab me as I would wish to be grabbed.  One thing very much in Oswald's favour, though, is his sense of irony.  His crime-writing mentor is manifested in Inspector McLean's 'apprentice', DC Stuart MacBride.