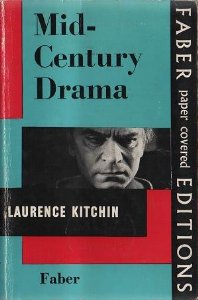 I was browsing the might Skoob in London's Brunswick Centre when I found this.  One key aspect of my research is the role of radio drama in developing British theatre in the 1950s and early 60s.  One contention of my thesis is that only the patronage of BBC radio brought Beckett, Pinter and Arden to audiences sufficiently large to warrant commercial management (and it was all commercial in those days) risking them on the London stage.  Note, I do not claim that radio was the only way for the angry generation; for example Osborne and Wesker went straight to the stage.

Anyway, I was disappointed.  I should have known I would be when I realised that Laurence Kitchin was the drama critic of the Times, which has naturally scorned the most democratic of performance media since Day One.  Instead what we get here is a tour of everything that alienated audiences from the clique that was London theatre circa 1955 - the tedious, impenetrable visits from the Moscow Art Theatre and the Comedie Francaise - with a sort of baffled consideration of why anyone might think television could contribute to art.  In that sense the book was useful to me - as a launch pad for why I and my generation rebelled against this highhanded elitist guff.

The second part of the book is cheap and nasty - reverential interviews with the theatrical great and good of the day lifted straight from the pages of the Times where they first appeared.  The interest here was thin: Peter O'Toole before Lawrence, the realisation how early Ashcroft was made a dame.  I was interested in the interview with Peter Holmes, who seems to have been seen as a star of the future whilst at Oxford, unusually combining the roles of actor, student and road navvy; it seems he later became a respected teacher and died in 2010.

My favourite of these interviews was the last, with Stella Adler (1901-1992) whose long career meant that she worked with Stanislavsky, the Group Theatre, Marlon Brando and Robert de Niro.  She lectured at Yale and founded her own acting school.  I find this much more impressive and appealing than Kitchin evidently did.

Here is a thoughtful review from John Wyver, to whom the book was more useful since his research is into stage plays on television.

NOTE: This review also appears on my Media & Culture blog.
Posted by rogerwood at 13:18