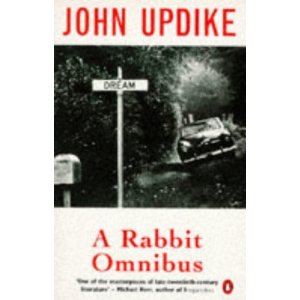 The third in the Rabbit Angstrom sequence and the last volume of the Rabbit omnibus, Rich is set in 1979-80.  President Carter is trying to rescue the hostages from Iran, big oil is sucking the life out of the US economy but Rabbit is rich, having inherited his father-in-law's Toyota franchise.  Harry is middle-aged now, part of the country club set, with a blossoming sex life at home and, later, abroad. Essentially, though, this is a novel about children, the next generation and how the indiscretions of their elders impact upon them.  Old Man Springer's actions have made Rabbit rich whilst anchoring him to Janice and lumbering him with the care of belligerent old Ma Springer, not that easy-going Harry objects to either.  Harry's infatuation with Jill (in Redux) has alienated him from his son Nelson whilst his earlier affair with Ruth (Run) may have resulted in an unknown illegitimate daughter who might possibly be the bewitching country girl who shows up one day in Harry's showroom.  Then Nelson arrives home (from Kent State) with amiable Melanie but it turns out he's really engaged to Pru/Tessa, who turns out to be carrying the Angstrom's grandchild.  A time, then, for taking stock - or, in Rabbit's case, one last indulgent spree.

I have loved all three of the Omnibus Rabbits and am so glad I didn't read them all in one go.  I'll be keeping an eye out now for Rabbit at Rest.