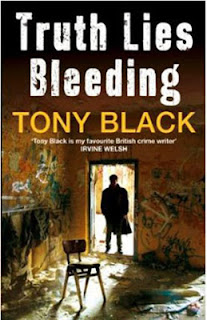 Black is the latest star of Tartan Noir, albeit he was born in Australia.  Truth Lies Bleeding is the first of his procedural strand featuring DI Rob Brennan.  You'd never guess it given the huge amount of backstory that is implied here.  I for one checked that the publisher hadn't somehow made a mistake but no, that story (which is solved here) was never written, and that is a mark of the quality of Black's writing.  He may knock them out at a rate of knots but this novel at least is a finely crafted work of art.

The procedural stuff is front and centre and eminently credible.  Black does not resort to the crude device of having his protagonist taken off the case a.s.a.p. so he can charge about like a private detective.  Brennan's battle is pretty much to stay on the case.  He has flaws but is not a drunk - again, Black inverts the stereotype and has Brennan declare that he never drinks more than one with the lads.

In fact, life at Edinburgh police HQ was so carefully evoked with murder squad members all behaving like proper, trained professionals, that I wondered if Truth Lies Bleeding was really noir at all.  The page one murder was bleak and gruesome but where does gritty become midnight black?  Answer: when Black unveils the twist that indicates the motive for the murder.  Oh yes, this is noir all right, better than most and as good as any I have read recently.

Black's first four novels featuring Gus Drury seem more traditionally noir.  It makes no odds to me.  I plan to read the lot.  Black has an excellent website and an interesting take on the use of ebooks to amplify the canon.  For that reason I am going to break with my own convention and add a second image.