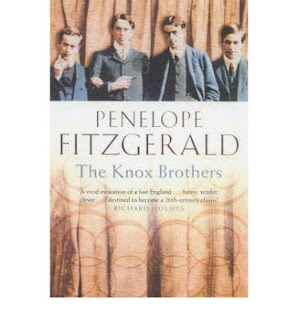 Penelope Fitzgerald was the daughter of the eldest Knox brother and therefore niece of the other three.  This fourfold biography was her first book, published in 1977 when she was sixty years old.

The writing is elegant, the elegiac tone maintained throughout.  The problem is, for all their widely touted brilliance, the brothers were peripheral players.  Fitzgerald's father Edmund rose be to editor of Punch, Wilfred and Ronald were noted but not spectacularly distinguished churchmen.  Ronald, the youngest, famously turned Catholic as a young man (newsworthy at the time because his father was Anglican bishop of Manchester) whereas Wilfred was extremely left wing politically
and absolutely conservative in (Anglican) religion.  The only brother who contributed significantly to wider society was the academic Dillwyn, whose abstruse talents as a classicist were turned to code-breaking in both World Wars.  He is credited with the insight that finally broke the German Enigma code.

The priestly brothers never married.  Edmund and Dillwyn both did but their wives are non-entities in Fitzgerald's account and the book suffers in consequence.  The only woman who figures is the stepmother, who took on the Knox brood (and the elderly, slightly dotty bishop) when the first Mrs Knox died young.  The redoubtable Ethel Knox seems to me worthy of a biography of her own.

Because the Knoxes are chiefly noteworthy for their association with greater events and greater men there is insufficient space in this four-hander joint biography to satisfy whichever interest is yours.  Ronald Knox is my particular interest, not because he translated the Bible but because he wrote Golden Age detective novels - and formulated the rules of the genre - and because he made a notorious radio broadcast just before the General Strike.  His famous friend was Evelyn Waugh, who scarcely figures here.  Waugh wrote a much better biography of Ronnie which was far more useful to me as only Waugh guides us to the actual script of the broadcast.  Father Thomas Corbishley, for those who are interested in such things, wrote a life of him from the religious standpoint, which is better than Fitzgerald on the decision to convert and his life at Oxford but, oddly, less insightful on the semi-authorised translation which occupied the Monsignor in later life.

One other point: if you are going to write a life of one who is dead, you really ought to cover the death.  Dillwyn's premature death is sketchily covered here, Wilfred and Ronnie more hinted at than described, and Edmund - Fitzgerald's father - not at all.

In summary, readable, enjoyable, but not sufficiently instructive for me.  I much prefer Fitzgerald's fiction.  There is a review of her wartime novel Human Voices over on my media and culture blog.
Posted by rogerwood at 15:57