The Killer Inside Me - Jim Thompson 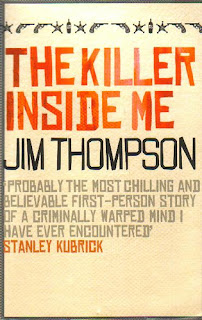 Thompson (1906-77) was the king of American pulp noir.  Nobody of his era did it nastier and he can still shock today.  The Killer Inside Me is probably his best novel, though I quite liked King Blood when I read it twenty or so years ago.  He takes great liberties with first person narrative, yet he gets away with it thanks to sheer bravura.

That is not to say Thompson was in any sense a poor or sloppy writer.  Let us not forget, as so many do, that he wrote the scripts of Kubrick's The Killing and Paths of Glory.  The Getaway and The Killer Inside Me have both made into Hollywood movies twice, The Grifters once.  Several others have been adapted as French movies.  Maybe it's the resolutely humdrum name, but Thompson really should be much better known than he is.

What we have here is the account of Lou Ford, Hicksville TX deputy, good old boy and psycho killer.  There are all sorts of reasons why they can't catch him.  Mainly, he's much smarter than they think he is.  Secondly, he simply doesn't care whether they catch him or not.  He's not to blame.  It's the sickness (italicised throughout), which first troubled him as a boy.  In the end, by unexpected literary sleight of hand, they do catch him.  Lou still doesn't care.  He has already prepared the final spree - for himself and others: "All of us that started the game with a crooked cue, that wanted so much and got so little, that meant so good and did so bad."  A sentence that pretty well defines the form.