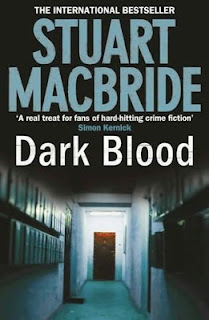 First review of the New Year is our auld acquaintance Stuart MacBride, whose Dark Blood is the sixth in the Logan MacRae series.  At its dark heart is sex predator Richard Knox, released on licence and dumped on the Grampian Police because he has inherited his grandmother's house in Aberdeen.  The Press, the victims' relatives, and organised criminals from Scotland and the North of England, they all want to lay violent hands on Knox.  But is he just a docile nonce who's found God, or is he the keeper of dark and lucrative secrets?  It takes Logan the thick end of five pages to discover the truth.

The usual series characters are all present and correct - Beardie Beattie, Biohazard Bob, DI Steele (doubly on the razor's edge because her wife is about to give birth to Logan's child and because they've put locks on the office windows to enforce the smoking ban) and Logan's gangland benefactor Wee Hamish.

The plot, however, has too many elements - not all can be satisfactorily resolved without recourse to the long arm of coincidence - and I early on took against
Posted by rogerwood at 16:53