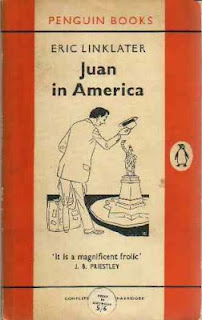 Eric Linklater is not a name on literary lips these days, but in his prime he was enormously popular and critically highly regarded. His wartime radio plays for the BBC were seen as so important to the war effort that they were discussed in broadsheet editorials. His third novel, Juan in America, was a bestseller and whilst it may seem entirely fanciful, Linklater's own travels as a young man were even more incredible - India, China, and indeed America. This is a novelist who knows whereof he writes.

I don't know, but I suspect his work and amatory experiences were not quite so varied as Juan's, who goes from college football hero to bum to slinger of hash, bootlegger, ice cream dispenser, upside-down opera singer and movie extra, and whose conquests include an Amazonian acrobat and a gangster's daughter.

Juan is a direct descendant of Byron's Don Juan. He shares the Don's taste for adventure and the ladies without being either predatory or amoral. He is a likeable companion as we follow his picaresque travels. There are occasional affronts to modern taste - Linklater's handling of black people is not what we would wish, though it has to be remembered that he was writing in America in 1931 and in many ways reflects the attitudes of East Coast Ivy Leaguers of that era. Read closely enough and you realise that, whilst he doesn't seem to rate his impoverished black characters as individuals, he does empathise with their historical plight, "the result of forcibly transporting a people from one continent to another, using them in slavery for several generations, and then bestowing on them a nominal freedom and a position beyond the pale of society."

All in all, Juan in America is a splendid example of English picaresque from the first half of the 20th century. As such, Linklater's rivals in the field were not Huxley or Forster but Priestley and Mackenzie, neither of them particularly popular these days either. But Juan in America has never been out of print in the eighty years since it was written, and that has to be the best kind of recommendation.
Posted by rogerwood at 16:02