Birthdays for the Dead - Stuart MacBride 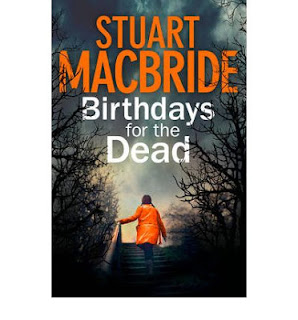 Strewth, Stuart MacBride writes the blackest of Tartan Noir.  This is his latest, a stand alone outside the Logan MacRae series.  Our protagonist is a cop, like Logan, but a very different kettle of fish.  Ash Henderson is violent, in debt to gangsters and addicted to serious painkiller medication.  But none of those are the secrets that matter - oh no, Ash is keeping something much more relevant hidden from his superiors in order to stay on the Birthday Boy case.

BB is a serial killer.  He snatches young girls coming up to 13, tortures them for a while, and then kills them on their birthday.  Every year thereafter he sends a birthday card to the family - homemade, with a photo of their daughter in progressive stages of dying.  But is his target the kid or her parents?  This is the question posed by Dr Alice Macdonald, the young OCD forensic psychologist brought in to refresh the investigation.

The reason the investigation needs refreshing is that the next victim will be BB's thirteenth thirteen year-old, which has to be significant, right?

To say more would be to risk giving the game away.  Suffice it to say, Ash finds himself on a mission, a race against time.  The pace is unrelenting, the characters richly drawn with deep back-stories, and the plot twists just keep on coming.  The final twist is simply stunning.

A superb example of the genre.  MacBride is surely the next big thing in British crime writing.