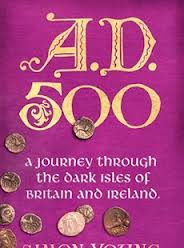 Simon Young is an amazing young historian of the early dark ages.  The conceit here is that a Byzantine civil servant is ordered to write a description of the Dark Isles for his emperor, who fantasises about restoring the lost empire in the west.  This officious bureaucrat has only archives and tall tales to base his account on until he lays hands on a primary document - the log of the last embassy from Constantinople to Britain, which, to say the least, didn't end well.  Young himself purports to be the translator of the later account, thus adding another layer of irony and comment via his copious translator's notes.  The Byzantine scribe, like civil servants everywhere throughout the ages, is scornful and dismissive of anything and anyone outside bureaucratic circles, so his asides on the barbarian Brits can be laugh-out-loud hilarious.  I particularly enjoyed Young/the scribe/the imperial ambassadors' account of the making of an Irish High King at Tara.

"The ritual lasted most of the night and was thoroughly unpleasant.  The king first mounted a stool that had been specially placed and 'mated' with the white horse.  We were encouraged to see that not only our party but also many of the visiting kings politely looked in the other direction and talked of the weather during these awkward minutes or played at board games..."

The wonderful thing is that all these outrageous accounts - even the one above - are based on genuine historical documents from the period.  Young describes his sources in an appendix at the end, so it should be fairly easy to follow up for those who want to go further.

The best book I have read this year - so good, I have already bought Young's subsequent book, Farewell, Britannia.