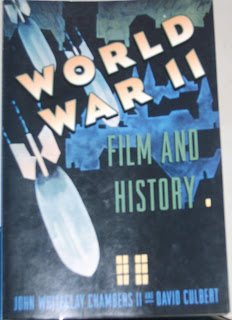 This is a collection of American scholarly articles from 1996.  It has the preoccupations of its time which, whilst always relevant to discussion of the media, are not always relevant to the history thereof.  I'm talking feminism and race.  It is a deplorable fact that the role of black people in WW2 has been neglected in mainstream film and that the role of servicewomen - as opposed to spies, agents and underground activists - was mainly administrative in WW2.

The are two contrasting pieces about a documentary called Liberators (US 1992) which may have bigged-up the role of black GIs in liberating concentration camps.  Sorry, but the colour of the liberators is not the issue in the concentration camp narrative.  There are also two articles about a very late Nazi film called Kolberg (1945) which I have never heard of but which I will now look out for.  The idea was to big up a rather peripheral Napoleonic seige in order to stiffen civilian resolve as Germany was blown to smithereens around them.  Other contributions that resonated with me were Freda Freiberg's paper on China Nights (Japan 1940), which apparently extols the moral virtues of Japan's invasion of China from 1937, and Stephen E Ambrose on The Longest Day (US 1962).

Ambrose is the historian whose books lie behind Saving Private Ryan and Band of Brothers.  It would be interesting to add papers discussing how those portrayals of war have changed the nature of the debate, particularly given that the issue here is one of accuracy.

The editors, John Whiteclay Chambers and David Culbert, use The Longest Day to illustrate the point in their conclusions:

"In The Longest Day (US 1962), an account of the Allied invasion across the English Channel in World War II, there is not one word about causation.  The Germans apparently lack understanding as to why they should resist.  Allied victory is inevitable, one is tempted to say, because the Anglo-Americans have so many more Hollywood celebrities in leading roles." [p. 151]
Posted by rogerwood at 18:02