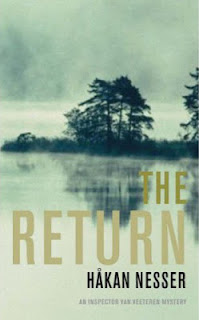 This, the second Inspector Van Veeteren novel, dates from 1995 and struck me as slightly showing its age.  The story is good - a two-time murderer is released from his second term only to turn up dead and dismembered in a ditch some months later.  I know what Nordic Noir fans are thinking - so did I, but it wasn't.  As usual, Van Veeteren slips out of the action as soon as possible and cogitates obliquely elsewhere.  This time the trick was a hospital operation.  Some critics have seen this as an homage to Daughter of Time or whatever the last Morse was called.  Personally, I think Nesser has stuck himself with an outsider as a hero who has so few teamwork skills that he could never in real life attain such high rank.

I didn't much like the flashbacks, either.  Too easy a device, and too corny.

Of the three Van Veeterens I have read over the last couple of months, The Return comes a distant third.  The mystery wasn't that complicated, the victim is someone you never empathise with, and no one we care about ever comes under any threat.  To be fair, though, it does have the best title of the three.