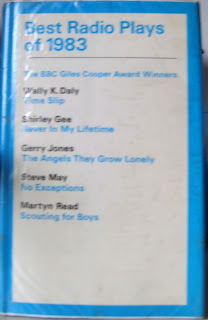 Another in the invaluable but sadly defunct Methuen series.  We begin with Wally K Daly's clone caprice Time Slip.  Very much in Ayckbourn mode and very funny. Wally K must be one of the more prolific and long-serving radio writers and is also a very amusing guy.

The cream of the collection for me is Never in My Lifetime by Shirley Gee.  A compassionate study of the Northern Ireland Troubles written at the height of the violence, the play is notable for being non-judgemental: bomber and victim are treated with equal depth and compassion.  I loved it.  Shirley Gee had previously won a Giles Cooper Award for Typhoid Mary (1979) and Never in My Lifetime, in a stage incarnation, won the Samuel Beckett Award in 1985.

The other full-length script here is Martyn Read's Scouting for Boys, an odd but engrossing confection in which an elderly scoutmaster accidentally returns to the stately home where he was once a notably cussed butler.  Alison Steadman and Jeremy Child played the barmy and quite possibly incestuous aristocratic twins.  Great fun.

Gerry Jones's The Angels They Grow Lonely is a short, particularly radiogenic fable about a man who can fly.  In Kafkaesque progression he visits a series of doctors all of whom know about the condition.  There's a lot of it about, apparently, we just don't mention it.

Normally I hate monologues, especially on radio, but I went for Steve May's No Exceptions in a big way.  It's the recollection of an unnamed primary school PE teacher of a kid from a troubled background who could run like the wind but simply couldn't do his reading and his maths.  So he was excluded from sport because those are the rules, no exceptions.  And now, some years later, he's got into car trouble with the police.  A beautiful piece of writing.
Posted by rogerwood at 13:06