The Abominable Man - Sjowall and Wahloo 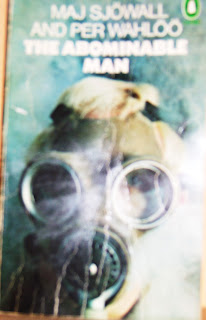 Maj Sjowall (b. 1935) and Per Wahloo (1926-1975) are the Adam and Eve of Scandanavian crime fiction.  Without them, and their breakthrough in the Anglophone world, The Laughing Policeman (1971), there may not have been any Larssen or Nesbo, both of whom share some of S&W's tropes and preoccupations.

Sjowall and Wahloo are Marxists, unabashed about commenting on the society that forms the backdrop of their fiction.  Cops can be, and often are, corrupt.  None of this was evident in British and American crime fiction of the early Sixties when S&W began.

The Abominable Man, the seventh of the ten Martin Beck novels, is all about corruption - or rather, one corrupt Chief Inspector and the superiors, peers and subordinates who are all complicit in covering up his brutality.  There is a particularly memorable sequence in which Beck's team goes through a sample of the complaints brushed under the carpet by the Justice Ombudsman.  Only one honest patrolman persists in reporting Stig Nyman - and where does that get him?

The action is compressed into a single extended night, which alone generates enough tension to keep the reader hooked.  50 of 185 pages concern the final showdown, at the end of which we don't know if Martin Beck lives or dies.  Just 13 lines after the bad guy is downed the novel simply stops.  Such confidence from the writers - and that is not the only technique of theirs which remains cutting edge to this day.

In summary, short, sharp and downright brilliant.
Posted by rogerwood at 17:11