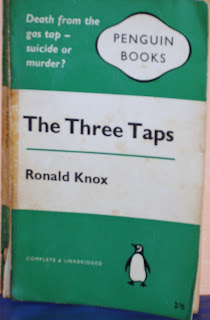 Ronald Knox (1888-1957) was an Anglican priest who became a Catholic, justly esteemed for his translation of the Vulgate and briefly notorious for his 1926 radio spoof Broadcasting from the Barricades, which claimed to be describing insurrection in central London and which a lot more listeners believed then ever really believed Orson Welles' remarkable similar War of the Worlds.  He has been remarkably well-served biographically, first by his friend and executor Evelyn Waugh, and later by his neice, the novelist Penelope FitzGerald, whose Human Voices I have written about over on my media and culture blog.

Knox is completely forgotten as a practitioner of English Golden Age detective fiction.  Actually, he formulated the classic rules of the form and was part of "the Detection Club".  He wrote six detective stories of his own, five of which feature the Insurance Company Investigator Miles Bredon, of which this is the first, from 1927.  A Midlands industrialist is found dead in a village pub where he's been on a fishing holiday.  The cause of death is asphyxiation from gas.  Is it murder or suicide?  A walloping great insurance payout hangs on the outcome.

Bredon and his wife Angela are something of an English Nick and Nora Charles (Dashiell Hammett's Thin Man novel and several movie sequels): they wisecrack, they mock one another, they do not seem to have a sex life.  Otherwise the dramatis personae are largely eccentric bachelors of middle age.  The plot is clever (extremely), the writing sparkling throughout.  In short, great fun.  A recommended read.

Incidentally, Knox's Ten Commandments or Decalogue, compiled in 1929, are as follows:
Wonder why no chinaman?
Posted by rogerwood at 16:39