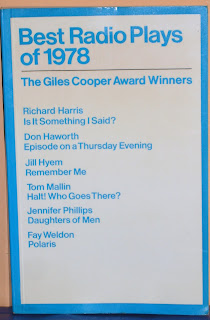 Eyre Methuen's collections of each year's Giles Cooper Award Winners are an invaluable source of quality British radio scripts, often by major writers of the period.  Fay Weldon, of course, is a major writer of any period.  Her play Polaris for the Afternoon Theatre slot on Radio 4, about the pressures of service on a newly-married couple, is brilliantly done.  The submarine captain, endlessly banging on about his food, is deftly characterised in a few lines.

Richard Harris's Is it Something I Said?  struck me as a fairly cynical twist on John Mortimer's celebrated Lunch Hour.  Don Haworth, born in the same as I was, was a radio drama master.  His plays are always interesting, often slightly off-beam, as this one is, and invariably surprising.

Tom Mallin was a fascinating character; primarily a visual artist, he scored a major hit with his stage play Curtains (1970).  Halt! Who Goes There?, the Mallin play given here and orginally broadcast in the cutting-edge Drama Now slot, was his sixth and final radio original.  It's about Arnold, marooned in a fascistic convalescent home after his cancer op.  Tom Mallin died of cancer in 1977, before the play was performed.  He was only 50 years old.

Jill Hyem, co-creator of the radio soap Waggoners Walk, is another prolific radio dramatist.  Remember Me is typical of the now defunct Saturday Night Theatre slot, the sort of thing that is now probably a four-hour/two-part TV mini series.  It's enjoyable and slightly daft.

Jennifer Phillips wrote Daughters of Men for the Monday Play, another key slot that has been callously let go.  The Friday Play, which was threatened with abandonment last year but is still clinging on, filled the gap to a certain extent.  Daughters, certainly, could be played there.  To my mind it was the most stimulating play in this collection.  It is about the social worker preparing court reports in a child custody battle.  The denouement is truly shocking, even today.  A stage version followed at the Hampstead Theatre Club in 1979.
Posted by rogerwood at 16:00