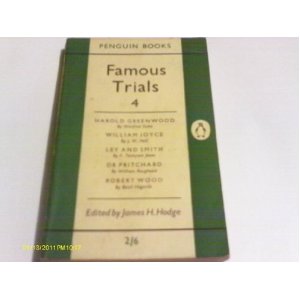 Harry Hodge began the Notable British Trials series in 1905; Penguin began republishing collections of them as Famous Trials some forty years later.  I can't resist them.  Mainly the Penguin collections focus on famous murder cases, specifically notorious murderers like Crippen.  This volume however includes Harold Greenwood and my near namesake Robert Wood who were both acquitted of murder, and William Joyce - "Lord Haw Haw" - who was hanged for treason.  Joyce is the most fascinating case here.  J W Hall, himself a lawyer, argues that Joyce's actual status as the American born son of an Irish father who became a naturalised US citizen some ten years before William was born meant he should not have been hanged for treason.  Hall's intense scrutiny of the hoops British justice squirmed through in order to execute the only Nazi tried in the UK could be dry but is wholly enthralling.  It's worth acquiring the book for this alone.

The other two cases - where the accused were incontravertibly guilty - are less compelling.  Dr Pritchard, the Scottish Victorian poisoner, would be better considered by a forensic psychologist who might be able to explain the methodical destruction of two women he really seemed to love.  The case of Ley and Smith, which I had never previously come across, is a sordid business, notable only for the fact that Ley, who had a sort of motive and dreamt up the scheme, was spared the noose and sent to Broadmoor whilst his hired stooge Smith, who only dumped the body, was hanged.  Could the fact that Ley was rich and Smith wasn't have anything to do with it?  F Tennyson Jesse, usually so deft in bringing murder to the page (A Pin to See the Peepshow), misses a trick here - Ley's character is so extraordinary he belongs in a novel.
Posted by rogerwood at 12:10