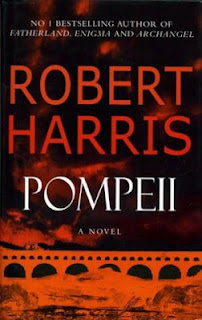 I'd previously read Harris's two Cicero novels, Imperium and Lustrum (Conspirata in the US) and liked them well enough, although Harris certainly set himself a challenge with a protagonist who is a professional windbag.

Pompeii (2003) is the first of Harris's Roman novels and I enjoyed it much more.  Again Harris set himself a challenge - it's not as if we don't know how it turns out for the town - but this time he invents a protagonist, the young aquarius of the Aqua Augusta, Marius Attilius Primus, who is ideally placed to subvert our expectations.  Equally, where the Cicero novels had Caesar and the fantastical Pompey as antagonists, here Harris has the splendidly corrupt slave-turned-property-developer Ampliatus, plus the eccentric and heroic Pliny the Elder as the protagonist's protector.

I'll certainly be reading the third part of the Cicero trilogy when it comes out later this year, but I wish Harris would treat us to the further adventures of Attilius.