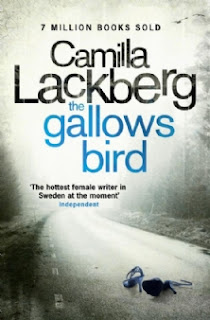 Another crime novel that took a while to get going, albeit the first death is where it should be, on page one.  I suspect the problem is that The Gallows Bird (title utterly inexplicable) is the fourth is a series about Swedish cop Patrik Hedstrom and Lackberg assumes we are familiar with, and already care about, her continuing characters.  It is not a mistake that Mankell and Nesbo ever make.

The plotting is superb - let's be clear about that from the outset.  I would even go so far as to say masterful.  Linking so many crimes together and unravelling the tangled web so slowly is a hallmark of the very best crime writers.  Setting one murder in a reality TV show is a brainwave that has been waiting to find a home ever since Big Brother first polluted the airwaves but Lackberg is the first to my knowledge to seize the opportunity.  She clearly knows her subject.

There are nevertheless real problems with this book.  The dialogue - in this translation, anyway - is truly appalling, not that it matters when the plot gathers pace.  There is no sense of place - we always know where Wallander's Ystaad is and have a pretty good idea what it looks like, but I'm not even sure if Hedstrom's Tanumshede is on the coast or inland.  The reality TV show is called Sodding Tanum, which is an unnecessary distraction for British readers; I'm guessing that's not the original Swedish meaning.

The ending, the cliffhanger for the continuing characters, is however very nearly as jaw-dropping as Wallander's fate in The Troubled Man.  It alone is sufficient for me to await the arrival of the 5th Hedstrom novel.  It's called Tyskungen.  An English version is given on Lackberg's website but it gives too much away and will hopefully be changed for the translation proper.

The website also contains helpful guidance (Crime School) for aspirant crime writers.  The section on the importance of dialogue suggests I am right about the poor quality, probably hurried translation of this book.

Note, according to the publisher's website, The Gallows Bird is now published under the title The Stranger, which strikes me as equally irrelevant.
Posted by rogerwood at 13:14