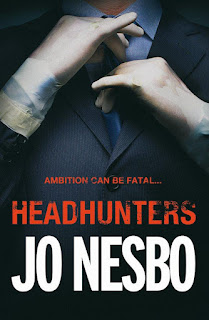 How annoying for those of us who write - the best contemporary Nordic author of series crime fiction, quite possibly the best full-stop, turns out to be just as good at stand-alone first-person psychological thrillers.  No wonder this has been snapped up for the first Nesbo movie, which opens in the UK and Ireland on April 6.

Thank goodness it's a Norwegian movie, not some hopeless Hollywood mess.  Unfortunately, I suspect that means it won't get shown much outside major cities.

However, back to the book...


I have simply never read such a masterful riff on the twists and turns essential for the genre, nor the untrustworthy narrator device which, when done right, raises the typical to the exceptional.  For example, most thriller writers return to their prologue at the end.  Not Nesbo; he picks it up in the middle and makes it his key turning-point.  As for the final twist ... it was so unexpected, so stunning, that I had to flip back to the relevant passage to make sure Nesbo hadn't cheated.  And he hadn't.  Wonderful - more than worthy of Hitchcock or Patrick Hamilton.

But the world of books would be a dreary old place if we all agreed...

I found a slightly different opinion on Beattie's Book Blog (unofficial homepage of the New Zealand book community), which is an excellent, highly-informed site:

I have to say I didn't rate the stand-alone Headhunters, (although I reckon it will make a great movie); no give me the Harry Hole titles any day and on that note the good news is that the next one is due soon.
Phantom – the thrilling follow-up to The Leopard……….


Summer. A boy is lying on the floor of an Oslo apartment. He is bleeding and will soon die. In order to place his life and death in some kind of context he begins to tell his story. Outside, the church bells toll.


Autumn. Former police inspector Harry Hole returns to Oslo after three years abroad. He seeks out his old boss at Police Headquarters to request permission to investigate a homicide. But the case is already closed: the young junkie was in all likelihood shot dead by a fellow addict. Yet, Harry is granted permission to visit the boy's alleged killer in jail. There, he meets himself and his own history. What follows is the solitary investigation of what appears to be the first impossible case in Harry Hole's career. And while Harry is searching, the murdered boy continues his story.


A man walks the dark streets of Oslo. The streets are his and he has always been there. He is a phantom.

Me neither.  Actually, I don't have to.  It is published in the UK today and Harvill Secker have done a vid.

What I want to know, though, is what has happened to the first two Hole books, The Bats (1997) and The Cockroaches (1998), neither of which are available here?  I can't think of another series, which has established a reputation and sales in another country, that hasn't started from the beginning here.  Decidedly odd.
Posted by rogerwood at 13:16