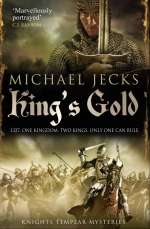 I have long been a fan of Michael Jecks' Knights Templar Mysteries, which now stretch to more than twenty titles.  I can't claim to have read all of them (yet) but Jecks and his fellow Medieval Murderer, Bernard Knight, are far and away my favourites in this burgeoning sub-genre.  Indeed, their heroes (Sir Baldwin and Crowner John) and West Country settings are broadly similar, albeit Knight's adventures take place 130-odd years earlier than Jecks's.  As a former Home Office pathologist, possibly the best-known since Spilsbury, you can trust Knight for his knowledge of crime and cadavers whereas I feel 100% confident of Jecks' historical research.

King's Gold is the latest Knights Templar in paperback.  Its historic setting, the short period between the deposition of Edward II and his notorious death, has long been of the utmost fascination to me.  As usual, the period detail is fascinating - the parallel murder mysteries are, in themselves, cunningly plotted - but the whole thing takes far too long to get going.  We are 67 pages in before our hero, Baldwin, appears at all, 230 before he joins the story proper.  Obviously this is far too long.  Baldwin is our hero, a key selling-point for the series, and we need him by chapter two at the latest.

That said, will I pick up the next instalment, City of Fiends, when I see it?  Like a shot.
Posted by rogerwood at 13:07