The Winter of Our Discontent - John Steinbeck 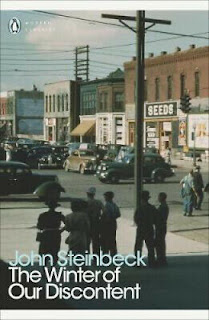 Not everything by Steinbeck is as famous as The Grapes of Wrath or Cannery Row.  But I enjoyed In Dubious Battle a couple of years ago and now I find The Winter of Our Discontent strangely moving.  It was Steinbeck's final novel, published in 1961, and got a poor reception in its day.  That is probably because it is about its day, set in the lead-up to the election that would ultimately return JFK, and also, I suspect, because it is very much an internal novel, as opposed to the wide open spaces and universality of Wrath or East of Eden.  Even a smallscale work like Of Mice and Men somehow seemed larger than this.

Ethan Allen Hawley is the scion of a historic Long Island family.  The Hawleys made whaling money but Ethan's father lost most of it before the war and Ethan himself lost the rest after returning from service.  He is now the clerk in Murullo's grocery store.  Otherwise he is happy, married to Mary with a son and a daughter and cosily housed in the Hawley family mansion.  He likes to goof about and make jokes, and, the novel being set mainly in his head, we get more than our share of his horseplay.

Then glamorous widow Margie Young-Hunt, an amateur psychic, predicts a change of fortune.  Ethan plays along and gradually sees the signs of change in real life - but only if he betrays his friends and joins the general corruption of the civic leaders.

The way Ethan's dilemma plays out took me completely by surprise.  I share many of the reservations of Steinbeck's first readers but have the ending is going to stay with me for a good long time.