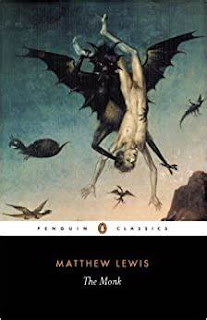 The Monk is the transitional novel between the High Gothic of Walpole and Beckford and the Romantic Gothic of Polidori and Mary Shelley.  The fanciful foreign setting is retained - in this case Madrid - but here it is particularly apposite.  The man turned monster is Ambrosio, the prodigy recently appointed as head of his order and the sensationalist preacher at the cathedral.  His end is partly at the hands of the Spanish Inquisition.

The Monk is a multiple narrative, two intertwined stories told in several voices.  This works surprisingly well and was no doubt an influence on Stoker when he produced Dracula almost a century later.  Essentially, Don Lorenzo and Don Raymond are two young men about town, heirs to great fortunes and noble titles.  Raymond has already fallen for Lorenzo's sister Agnes and Lorenzo meets young beauty Antonia at one of Ambrosio's packed sermons.  Both are good, religious girls.  Agnes, indeed, is on the verge of becoming a nun.  Raymond, nevertheless, gets her pregnant.  Ambrosio, meanwhile, has been seduced by one of his novices, a woman disguised as a monk.  She is a very naughty woman and uses demonology to enable Ambrosio to murder Antonio's mother, drug, kidnap and ultimately rape Antonia.  Meanwhile Agnes's pregnancy has been discovered and the domina of the Order of St Claire has her immured in a secret sepulchre.

Yes, it's that level of Gothic.

Everything about The Monk was sensational when it was published in 1796, not least that it's first-time author was only twenty and already a Member of Parliament.  Lewis later had some success on the stage but was forever 'Monk' Lewis.  Despite bans and edits and withdrawals from circulation The Monk was a runaway success and has continued for more than 200 years as an underground classic.  Most people have heard about it (let us not forget that Lewis visited Byron and Shelley and their establishment at the Villa Diodati immediately before the creation of The Vampyre and Frankenstein) but not everybody has read it.  They really should.  It is better than it has any right to be.