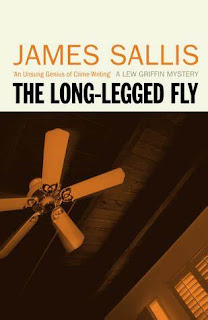 The Long-Legged Fly (1992) is New Orleans noir in which PI Lew Griffin searches for lost women over four decades.  Only he doesn't find them all and in the end he turns to writing New Orleans noir crime fiction featuring a shambolic PI called Lew Griffin.  Like, I mean, wow.  Post-modern or what?

The trick is, though, Lew Griffin, despite his drink problem and penchant for life's losers, is and remains a compelling character.  You can't help but side with him.  He has a bad news background but has improved his mind over the years and believably winds up with a lecturing gig on the back of his success as a writer.  The son of his first marriage is also a writer-academic.  He disappears in the last section.  The love of Lew's life, who lives in Paris, joins in to help Lew investigate.  The trail runs cold back in New York and Lew doesn't find his son, at least not in this novel.  So it's one last failed investigation.

I was startled by this book - startled mainly that I hadn't come across Sallis before.  He is extremely good and deserves to be as big as, for example, James Lee Burke.  Highly recommended.