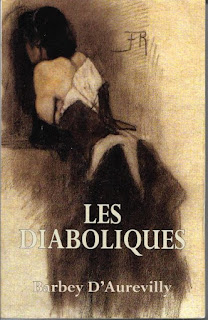 Latest stop on my tour of decadent French fin de siecle literature is Barbey D'Aurevilly's collection of scandalous short stories from 1874 - so scandalous that it was confiscated by the Ministry of Justice.  You might think, so what?  Victorian sensibilities, even across the Channel, were very different to ours.  But no, the fate of the promiscuous woman in 'At a Dinner of Atheists' is horrific bordering on pornographic in any era.  Likewise the nature of the 'Woman's Revenge' in the final story.

It's called The She-Devils in most English translations but I think that leads to misconceptions of misogyny.  Each of the six stories features a strong, transgressive woman but I don't think for a moment that Barbey D'Aurevilly looks on them with contempt or disgust.  On the contrary, I believe he is fascinated by them - aroused, certainly, but also intrigued.  The stories are long - forty to fifty pages - and he gives himself plenty of time to probe their psychology and motivation - in itself a counter to any she-devilishness, because of course devils do devilish things for the sheer hell of it.

The authorial style, especially the at-one-remove (recit parle) storytelling, is not to everyone's taste but it is of its time - the parallels with Huysmans are obvious - and I was held spellbound.  Very dark material, not for beginners, but I want more.