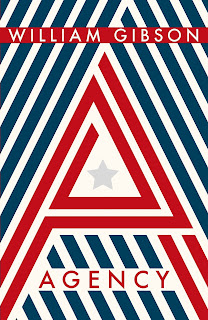 The 2020 follow-up to The Peripheral (2014), Agency is the second of Gibson's 'Jackpot' novels - set after the oligarchs have hit the jackpot and destroyed democracy.  In this very near future, the first autonomous artificial reality laminar is about to be launched.  But first it must be tested, and ace app tester Verity gets the gig.  Only Eunice isn't a game.  She is very much weapons grade AR and soon sets about building herself a network of branch plants through which she accesses wealth and technology, all for the public good.  And anybody or anything that operates in the public interest obviously has to be stopped.

By this time cyber technology has enabled the present to communicate and interact with the past, but only the recent past - times sufficiently technological advanced to answer back.  And in this case we are talking 2017 and an alternate past in which Trump didn't win the 2016 election.  The problem is, as this alternative indicates, is that if you interfere even slightly with your own past you don't change your history, you create an alternative, a time branch or 'stub'.  The present has got a handle on this - people whose role is to protect the past, but of course the perception of what's worth protecting and what should be interfered with is subjective.

Anyway, the hunt for Verity and Eunice spreads across several stubs, which means a lot of layers and a lot of characters, most of whom (I'm guessing) featured in The Peripheral.  We don't always get enough back story for us to engage - I couldn't give two hoots about Wilf and Rainey and baby Thomas in cosplay London, but Connor, the gung-ho drone pilot, is great fun.  Fortunately Verity is interesting enough, and Eunice has been given a sassy African-American avatar that keeps us amused.

It's a complex story in a complex narrative.  The core idea is dazzling and confronts the challenge of time-travel literature head-on and, by and large, successfully.  I get bored, however, with super-rich superstars like Stets and his super-cool artist girlfriend.  Somebody wants to blow them up, be my guest - which rather undercuts the tension at the end.

For all my reservations, Gibson remains miles ahead of the pack and always worth reading.