All Shot Up - Chester Himes 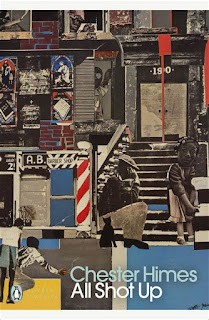 All Shot Up, the fifth in the Grave Digger Jones/Coffin Ed Johnson sequence, aka 'The Harlem Cycle', is a great introduction to Himes's work.  Set in a snow storm, it is one of those capers in which everything ties together - the man stealing tyres who watches a stick up by fake police in a stolen car and the old woman who gets run down by the gold Cadillac who isn't either old or a woman and who gets up straightaway, only to wind up very dead shortly after.

Such complex interweaving is hard to bring off but Himes does it brilliantly, in a beautifully short novel full of grotesque black humour and smart dialogue.  Every character who so much as strolls across the scene is full realised, every motive is reasonable in its own cockeyed way, and Himes even finds time for commentary on corrupt ghetto politics and the Harlem transvestism scene which was obviously thriving in and around 1960 when this book was written.

As indicated above, this was my first taste of Himes's dark brew.  It certainly won't be my last.