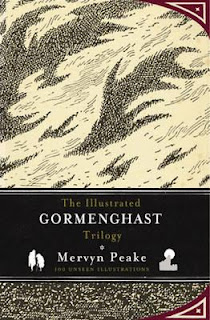 Re-reading Titus Groan, I was struck by its uniqueness.  I couldn't come up with an English novel quite like it.  Vathek, perhaps, or I was I just associating Beckford's folly at Fonthill with the castle of Gormenghast?  Thomas Love Peacock's Nightmare Abbey then; but that is literary satire and Peake's achievement goes much, much deeper.

If anything, Titus is about the absurdity of traditional ritual.  Within the fantastical confines of Gormenghast life is entirely circumscribed by age-old convention dating back seventy-six generations and now enters a seventy-seventh with the long-awaited birth of the titular male heir.  At the same moment seventeen year-old Steerpike, one of Mr Swelter's kitchen scullions, seizes the moment to begin his own climb to power.  Steerpike is the malevolent agent of change, who grooms the earl's twin sisters to burn down Earl Sepulchrave's beloved library (storehouse of tradition), triggering the mental breakdown which convinces him he is the Owl of Death. 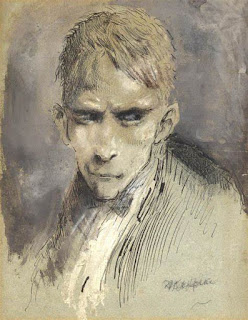 In just over a year Sepulchrave dies and Titus undergoes his 'earling'.  The twist, setting us up for the second instalment (Gormenghast itself), is that Steerpike ends up being appointed deputy keeper of the rituals.

Peake's writing is superb; sumptuous descriptions befitting such a fine visual artist, but also a truly poetic way with words.  Any writer who unearths and uses the word 'spilth' is my kind of writer.  Peake also has the advantage of being darkly funny.