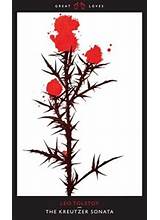 The Kreutzer Sonata (1889) is a novella, and thus much less daunting than Tolstoy's vast novels.  To be honest, I only chased down the ebook because I had read in Max Nordau's Degeneracy (1892) that it was a degenerate work, which I thought somewhat unlikely.  Now, having read it, I can see where he was coming from.

On one of those interminable Russian railway journeys, our narrator finds himself buttonholed by a second rate count who insists on telling him why he murdered his wife.  The count is called Pozdnyshev; the wife doesn't merit a name.  He explains that like all young men of his class he used prostitutes and other men's wives before marriage.  Because of that he conflated married love with sex and thus became hugely disappointed as early as the honeymoon.  His wife was beautiful and great in bed.  Other than that they had nothing in common.  Nevertheless they had five children.  He liked the bits where she was pregnant and nursing because at those times there was no sex.  After her fifth pregnancy, however, the expensive doctors told her about contraception, thus forcing them back into one another's company.  Under this regime the countess lost weight and recovered her looks.  She regained her prowess at the piano and gave a soiree with a professional violist.  At this, they played Beethoven's Kreutzer Sonata.  The count describes how this tune inspired his conviction that his wife and the musician were lovers, hence---

It is very clever how, to all intents and purposes, Tolstoy creates his own soundtrack for the count's descent into murderous madness.  The murder itself is recounted in elaborate, almost excruciating detail.  It is very unlike our expectations of Tolstoy, himself of course a count who was debauched in youth and then married...  We are left wondering how the Countess Tolstoy felt about this work, especially since I'm sure I read somewhere that she untangled his drafts and prepared decent copies for the publisher.

In essence then, it is a longish disquisition on the thesis that men who use prostitutes shouldn't get married, whereas married men should abstain as far as possible from sex, at least until age reduces the urge and obviates the consequences.  This is argument which got Nordau's dander up and, according to him, made Tolstoy's name in Western Europe.  It certainly kept my interest.