Down There - J K Huysmans 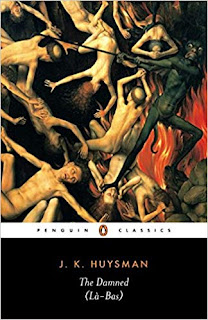 The ultimate fin de siecle degenerate novel, so they say.  In fact La Bas is an academic discussion about the state of French literature at the end of the Nineteenth Century.  It was decadent, certainly, but that does not make a book about it decadent.  Durtal, our unheroic hero, is a middleaged novelist who has followed the naturalism of Zola about as far as it will go and found it lacking substance.  What he misses is the human soul.  So he sets out to bring naturalism and psyche together in a historical study of Gilles de Rais, the notorious 'Bluebeard' of medieval France.

Gilles de Rais interests Durtal because he started out as a pious soldier, the most important ally of Joan of Arc.  But after Joan's execution and the end of the war with England he becomes dissolute, debauched and appallingly depraved.  After he has defiled, butchered and discarded countless young children he is finally brought to book.  At his trial he confesses everything but recovers his Christian faith to such an extent that the parents of his victims escort him to his death, praying for his salvation.

Durtal wants to wallow in faith of the medieval kind.  He befriends the bellringer of St Surplice and through him an eccentric astrologer who claims he is being murdered remotely by a priest who has gone rogue and now celebrates the Black Mass.  It is the Black Mass which Durtal ultimately witnesses that gives the book its reputation.  Actually, this is nothing at all alarming, more childish than satanic.  What really did raise my eyebrows was what startled me a couple of years ago when I read Zola.  It's the sex.  Durtal finds himself being seduced by the wife of another dining companion and sleeps with her only because she can get him admitted to the Black Mass.

The end of the novel is something of an anticlimax.  The rest of it is absolutely fascinating.