A Song for the Dark Times - Ian Rankin 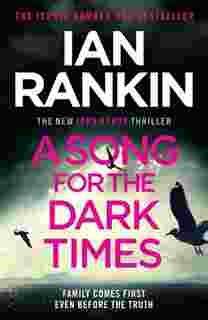 Rankin's latest Rebus is as good as ever.  Late phase Rebus, of course, means retired Rebus getting involved, one way or another, in crimes being investigated by Siobhan Clarke and Malcolm Fox.  And there's no change here.  What I would say, though, is that in A Song for the Dark Times the potentially tricky mix is done better than in some of the others.  The cases are separate but involve some of the same people.  Rebus is called up to the rural North when his estranged daughter's partner is murdered and Samantha is a prime suspect.  Meanwhile in Edinburgh Fox joins the team led by Siobhan's partner DCI Graham Sutherland, investigating the murder of wealthy Saudi student and James Bond fan, Salman Bin Mahmoud.  Fox has been seconded from MIT because Salman's father is being detained by the Saudi authorities and the Foreign Office want oversight of the case.  The connection between the two cases is that the Meiklejohn family owns the former PoW camp in which Sam's partner's body was found, and Lady Isabella Meiklejohn appears to be Salman's girlfriend.

It's very clever - beautifully written, of course - and eminently satisfying in the resolution.  Rankin on top form.