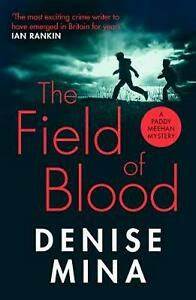 Field of Blood is the first in the Paddy Meehan series.  Paddy is really Patricia but is known as Paddy because of the real Glasgow hardman who was a famous victim of injustice in the 1960s and 70s.  Mina tells us in the afterword that her mother arranged for her to meet him when she was starting out as a journalist.

It is 1981 and the female Paddy is also starting out as a journalist, albeit she is currently just on the copyboy bench.  Colleagues start to take notice when Baby Brian is found on the rail tracks and Paddy's fiance's cousin is arrested for his murder.  The cousin and his accomplice are both boys themselves.  The echoes of Jamie Bulger are obvious.

Paddy starts to investigate and soon forms the impression that an adult was also involved, and that adult controlled the kids.  At this point - slightly late for my liking - the story really takes off.  Paddy is put in real jeopardy before the end.  Everything is credible and logical.  My only reservations are there was slightly too much time spent on Paddy's Catholic background - although, her escape from convention is a key part of her character development - and the Meehan material was not really worth the trouble.  Perhaps Mina takes it further in subsequent novels in the series.

I am already a big fan of Mina.  I consider this not to be her best novel, largely because in other books she has set a higher standard.  It is still a cracking good read.