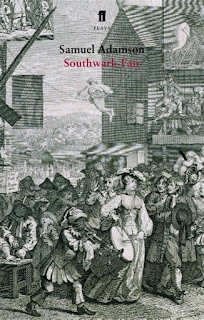 Samuel Adamson is an Australian playwright who has been living and working in London since the early Nineties.  Southwark Fair was produced at the National Theatre in 2006 with Rory Kinnear in the lead.  It is a London slice-of-life comedy, very much of its time.  That time was when being gay or from Eastern Europe was the biggest thing hip young Londoners had to worry about.  Things have changed so much in the last decade that Southwark Fair is now a period piece every bit as historical as The Importance of Being Earnest or The Way of the World.  Like them, it offers a snapshot of happier, better times.  Producers should consider reviving it if theatres ever reopen.  It is genuinely funny, with interesting characters and a clever structure which goes through scenes we have already seen from the other point of view (which could be off-putting were it not so brilliantly done).  I am neither gay nor from overseas and have never lived in London, or wanted to.  Yet I genuinely enjoyed reading Southwark Fair and would happily pay money to see it onstage.
Posted by rogerwood at 16:46