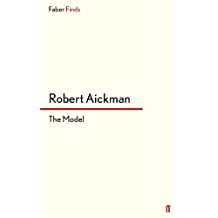 The Model is a novella, left by Aickman when he died in 1981 and published in 1988.  It is now a Faber Find and I got the ebook.  Aickman told a friend he thought it was his best work.  I wouldn't go that far but it is different and it is always great to see a dying man branching out into a new field.

What we have is a grim fairy tale, set in Tsarist Russia sometime in the second half of the Nineteenth Century.  Elena is a young girl who lives a very sheltered life in a remote town.  Her mother is an invalid, her father the local lawyer.  A visiting couple leave her a book about ballet which inspires Elena to build a model theatre.  A very strange man then pays a flying visit and gives her toy dancers.

Elena is on the verge of puberty and her parents start pressing her to look to the future.  Her mother wants her to become a nun which, she has been told by God Himself, will keep the mother alive a little longer.  Her father, however, wants Elena to become the 'companion' to the local nobleman's mysterious son and, all being well, to marry him.  But Elena is set on becoming a ballerina and takes herself off to the nearest town with an opera house.  She travels alone through the bleak Russian winter.  Along the way she meets a talking bear and a prince who wants to be a revolutionary.  She makes her debut her first night in town, but is taken in by a strange brown lady with simian servants, only to be rescued by a distant cousin of one of her friends back home - a young woman posing, for reasons vaguely connected to her university studies, as an officer in the hussars,

The Model is, in short, a triumph, very different to Aickman's other work (much of it reviewed elsewhere on this blog).  It is beautifully written, full of colour and imagination, and strongly recommended.