The War Hound and the World's Pain - Michael Moorcock 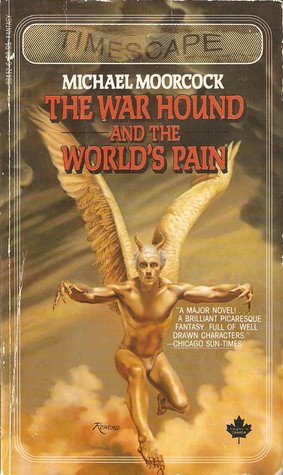 The War Hound and the World's Pain (1981) is, I believe, the first of the von Bek series. I say 'believe' because Moorcock continues to revise and rebundle his back catalogue. There is definitely a walloping Von Bek single volume - I have seen it - and some apparent authorities mention a trilogy, though the complete Von Bek seems more than three times the size of this instalment. I therefore decided to go with the series as originally written and published.

I was surprised to find Ulrich von Bek starting out as a mercenary in the Thirty Years War 1618-48. The war was always silly U and went on far too long. Ulrich has certainly had enough, so he abandons his troop and rides off into the wilds of Germany. He finds himself in a forest. He realises that there is no bird song, no stirring of animals in the undergrowth. He finds a palatial castle - stocked with food but utterly uninhabited.  Von Bek helps himself. The beautiful Sabrina arrives. He helps himself there, too. After some weeks of this Sabrina introduces him to the castle's owner, the fallen angel Lucifer. Lucifer, it turns out, has also had enough - enough of trying to keep the peace between the dukes of Hell, enough of being at odds with God who once loved him. Lucifer makes a pact with Ulrich. If Ulrich can recover the holy grail, which Lucifer can offer to God as a peace offering, then Ulrich can have his soul back and Sabrina.

Thus the quest begins... taking Ulrich and his companion Grigory Sedenko to the World's End, which mostly turns out to be an alternative world called Mittelmarch which co-exists within and alongside the real world. He fights various hellish enemies, mostly controlled by Johannes Klosterheim, former employer of the boy Sedenko, who is on a similar quest. Von Bek is assisted, from time to time, by Philander Groot, the dandy-magus, an echo of the sort of hero Moorcroft was developing in his rococo period ten years earlier.

The characters here are all well written. I especially enjoyed the angelic Lucifer and, of course, Groot. The story was compelling; at this stage of his career Moorcroft had the gift of writing exactly the amount his concept could bear. Whilst we know the story will continue, which it does in The City in the Autumn Stars, the quest here is self-contained - a good job given that the second instalment didn't arrive until 1986 which, given Moorcock's breathtaking productivity, must have seemed an age to keen readers.
Posted by rogerwood at 15:48