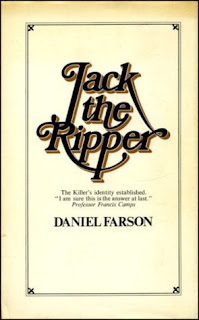 Farson's 1972 book introduced the barrister Montague Druitt as Number One Suspect. Actually - as is so often the case with this fascinating work - he put the name to the suspect that Leonard Matters had known about and dismissed in the first ever Ripper book (1928). Farson claimed to have seen the famous Macnaghten Memorandum, a note written by the man who took over as head of the Met immediately after the murders ceased. Farson would have us believe that Macnaghten wrote in his official capacity, a summary document to close the file. Actually what Macnaghten did (and Matters proves beyond reasonable doubt) is copy out Major Arthur Griffiths' suspect list from his 1898 Mysteries of Police and Crime (Part 1). Griffiths had overseen prisons but had never served with the police. He did, however, have extensive police contacts and it may well have been that both Griffiths and Macnaghten got their information from the same source. Was that source authoritative? Probably not, given the insistence that police inquiries wound down after Druitt's body was fished from the Thames on December 31 1888, when in fact key frontline investigators believed the Ripper continued killing. Inspector Reid turned up at various prostitute murders well into 1889 and 1890, and Inspector Abberline was apparently convinced that George Chapman (caught and hanged 1903) was the Ripper.


Farson's book is frankly nowhere near as good as Matters' original. Farson never gives us sources we can check whereas Matters always does. Again, the fact is, Matters shows us, almost half a century earlier, how weak Farson's theory really is. Farson's suspect is a reasonable candidate, whereas Matters' nominee is well nigh ridiculous; on the other hand, Matters' research is thorough and documented whereas Farson in the end resorts to absurd assertions. Farson also claimed (I haven't yet checked if the claim is true) that he is the first to produce a photograph of Druitt. He then goes on to shoot himself in the foot. Is that a glint of madness in the eye, he asks. Answer: no it isn't. Is that an incipient moustache? Absolutely not.


Actually, Farson's research, such as it is, was done for a pair of TV documentaries aired over a decade before the book came out (Farson was an early star of ITV). While the programmes were still be edited, the research dossier mysteriously disappeared, which raises rather obvious suspicions. Nevertheless the book was a big success (as the TV version had been) and really ushered in the great wave of Ripperology that persists to this day. It is essential and enjoyable reading. Farson has an engaging style - but I wouldn't trust him as far as I could throw him.
Posted by rogerwood at 15:55